Twitter is going to be publicly traded (IPO), probably on November the 15th. That is going to be a really nice exit for the original investors and (co)-founders who will have huge returns. But how much is it worth?

Offtopic: I always think about this short movie from Pixar when I see the blue bird from Twitter.

I use Twitter. Maybe too much. But it has it own rythm. It’s own culture. it has its own style and you can perfectly curate your newsstream by choosing who to follow. And especially who not to follow (yeah, I create my own filterbubble plus any confirmation bias and the world gets really small in such a open internet space; true)

Anyhow: something special is happening to Twitter. It brings two worlds I am interested in together. It will be publicly traded any time soon.

We’ve confidentially submitted an S-1 to the SEC for a planned IPO. This Tweet does not constitute an offer of any securities for sale.

But what will it be worth in a few years?

The mission we serve as Twitter, Inc. is to give everyone the power to create and share ideas and information instantly without barriers.

But like we also see with Facebook, it has to keep all their stakeholders happy. Including the shareholders. And so Twitter turned to advertising models a while ago. It is nowhere near their top saleslevels per user. The current numbers are just somewhere in between zero and what can be possible. Definitively not any point of reflection of its real sales level in the coming years. And that’s sales, Twitter is currently makes losses to finance the growth. So any oldskool P/E measurement can’t be done. In the end that’s what we want in a world of capitalism. Current value is the best estimation of the discounted value of all future cash flows. So we have to estimate a lot with Twitter being somewhere in between.

Current state is not that important, it is more what it can be in the future. But still the latest figues from the official filing: 218 million montly active users, growth of almost 50% compared to 1 year ago. 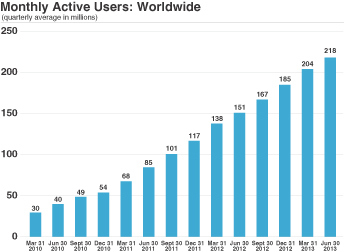 In an ideal world in which all things be going smooth and perfect for Twitter, what would be the upper limit? If you know that, you can judge on that for any further reasoning. Here is my shot:

That will give Twitter a value of 80 billion dollars in 2018.
With a 20% discount rate it will give a fair value today of $32.1 billion maximum. With 472 million shares outstanding it will give a maximum share price of: $68.11

But these are perfect conditions and high numbers for both active users and value per user. These are really the upper limits with the current business. If they add new streams of revenue other than advertising it might be another story but i don’t see any right now (and they would have tought about them right now).

This is the perfect storm. Why it probably doesn’t get such a value is mainly because;

That’s why it worth less than current values of LinkedIn and Facebook users in my opinion. Targeting can be done, but not as accurate as other platforms. More reasonable numbers would give Twitter 400 million  users maximum and value of $75 per user (still pretty random).

With those number you end up with a value of $12 billion (shareprice of $25.5) And even than I guess I won’t buy the shares because of the high uncertainty.

But what value will be good for Twitter shares?
I don’t know. And sorry to tell you. Nobody knows. Even those securities analysts don’t know (They are just contentmarketeers to let you trade).

“People who look for easy money invariable pay for the privilege of proving conclusively that it cannot be found on this earth.”